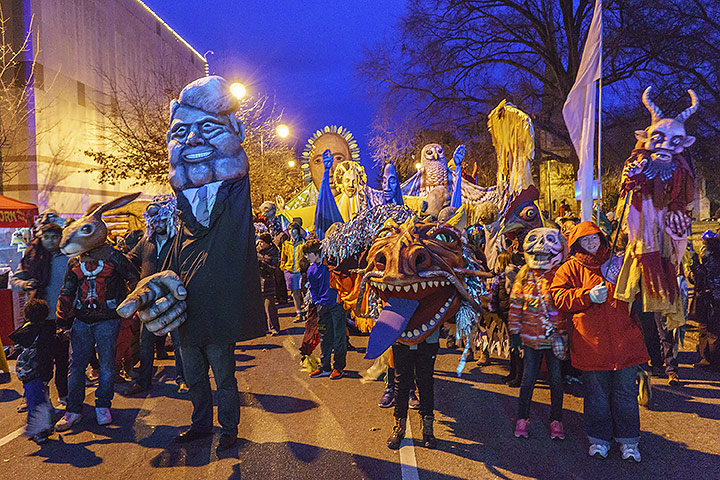 Admission for First Night Raleigh 2018 is now on sale at:

Returning for a fourth year are the GoRaleigh buses, which will operate two park-and-ride services from locations at NCSU campus and Triangle Town Center Mall. The NCSU Raleigh location is at the NCSU Park and Ride Lot at Oval Drive and Initiative Way (off of Centennial Pkwy) and the Southeastern location, at Triangle Town Center Mall, 5959 Triangle Town Boulevard. Service will begin at 5:00 pm and will make frequent the stops every 30 minutes, or less, carrying festivalgoers into the heart of First Night Raleigh at Morgan Street and Fayetteville Street. Regular GoRaleigh fares will apply at $1.25 per one-way trip, or full-day pass for $2.50 round-trip. This service will end at 1:00 am.

In addition to making the trip easier with the park-and-ride service, the First Night Raleigh mobile app is now available thanks to Fidelity Investments. With the ability to customize itineraries, rate performances and connect on social media, the First Night 2018 mobile app can be downloaded for free in the Apple App store and in the Google Play Store. The mobile app enables users to truly create their own adventure as they explore the offerings of First Night Raleigh 2018.

This year’s festivities kick off at 2:00 pm with the return of the DIY Festival at NC Museum of History, NC Museum of Natural Sciences and outdoors on the Bicentennial Plaza until 6:00 pm Adults and children alike can ring in the New Year with the Early Countdown celebration from 5:30 pm to 7:00 pm. Performances at the main stage begin at 5:30 pm. Later into the night, the streets of Raleigh come alive with performances covering over 20 blocks of downtown Raleigh after First Night Raleigh’s tradition, the People’s Procession at 6:00 pm.

North Carolina favorites, Holy Ghost Tent Revival will headline this year’s main stage leading up to the midnight WRAL Countdown to 2018, with another local act, Cane Mill Road, hosting the early countdown at 7:00 pm. Ira David Wood III returns alongside his son as the countdown masters of ceremonies, with the famous acorn dropping at midnight while fireworks soar into the night sky.

A complete list of the full lineup can be found at FirstNightRaleigh.com, with admission on sale now. All Day Passes can be purchased for $11** when purchased in advance (**plus local and state sales tax) and VIP Passes, which grant attendees priority access to indoor venues, can be purchased for $50 exclusively in advance. On December 31, on-site All Day Pass sales will be $15* for adults and $12* for children (*including local and state sales tax).

Our mobile app is available NOW through the iTunes store AND Android!   App Presented…

We hope that you had a blast at First Night Raleigh 2016. We hope to…