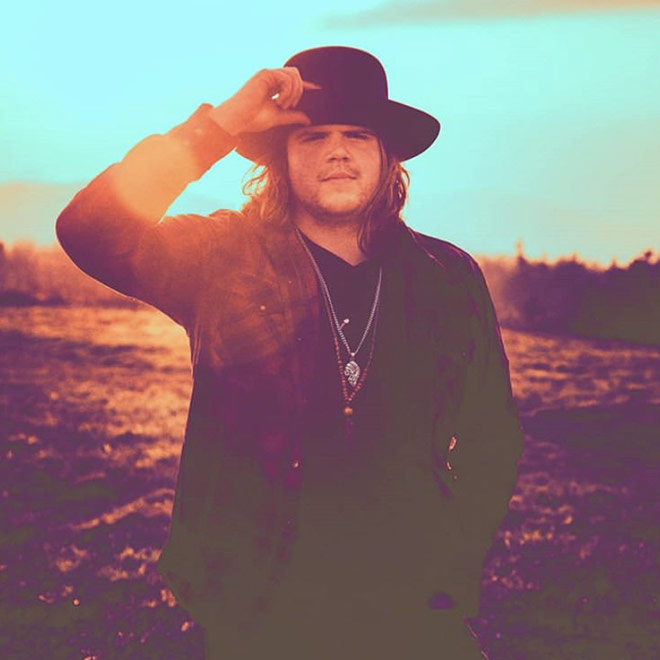 On his new album, BORN FROM SOUTHERN GROUND, CALEB JOHNSON & THE RAMBLIN SAINTS soulfully and bombastically take us to the church of rock ‘n roll. JOHNSON uses this album to showcase his southern roots and he channels a spirit that combines gospel, blues and rock n roll into a modern but classic and timeless sound.

BORN FROM SOUTHERN GROUND delivers a heaping dose of gritty southern rock swagger starting with the earth-shaking gothic gospel of “Holding On” in which JOHNSON displays a fearlessness and vocal power unmatched. Next up is the ethereal swampy stomp of “Solid Gold,” a “Kashmir”-like anthem that proclaims: “Dream your dream like a fire that never goes cold!” On the overtly sexual electrified funk of “Sugar,” he wails like a deep-fried Steven Tyler with a side of James Brown. “Born and Raised” has JOHNSON proudly belting the tale of his Southern upbringing with a Crowes and Seger flavor. The soulful spine-tingling ballads “Better off Alone” and “Blind” has JOHNSON showcasing his soaring four-octave range that goes from buttery smooth to volcanic conviction. The whiskey-soaked bar anthem “Hanging With The Band” takes listeners back to simpler times with an homage to summer partying and classic rock radio. The album shifts to a heavier sound with the grinding metal motor cycle crunch of “Ride with the Devil.” The drums pummel and the guitars scream while he growls, “you ride with the devil, you never get your soul back,” warning listeners that if you live by the sword you die by the sword. Rounding out this monster of an album is “It’s Not the End,” an uplifting power ballad that would make Meat Loaf weep, and an acoustic version of “Hanging With the Band” that tips its hat to early era Rolling Stones.

The initial spark for CALEB JOHNSON’s love of rock music was ignited in his early teens when a friend loaned him a copy of Queen’s GREATEST HITS. He was blown away by the powerhouse vocals of frontman Freddie Mercury and the neo classical brilliance of guitarist Brian May. Over time, JOHNSON’s musical palate evolved from classic hard rock to grunge and soul. It wasn’t until his junior year of high school that he discovered he could sing. The genesis of wanting to be a rock star happened when his friend, Josh Sawyer, approached him to be the singer for his band that was set to perform in the high school talent show. What happened the night of the talent show changed JOHNSON’s life forever. An inspired performance of Creedence Clearwater Revival’s “Fortunate Son” left the audience floored and in shock.

JOHNSON recalls, “When I heard the audience erupt, it just gave me chills and I realized that performing and making music was what I wanted to do the rest of my life. After that, I started singing every day and just immersed myself in the craft of performing. It was completely my passion and I was consumed with it.”

Shortly thereafter, CALEB JOHNSON formed an original rock band and began touring regionally and locally around his hometown of Asheville, NC. “Asheville is a vibrant, culturally diverse city surrounded by the breathtaking blue ridge mountains”, he says. “There is so much creative inspiration here.”

In the summer of 2010, he was involved in a freak accident that left him in the hospital for three weeks. It was there that he got the idea to audition for the reality singing show, “American Idol.” He explains, “I was bedridden, so I watched a lot of TV and ‘American Idol’ was one of the shows I frequently watched.” Flash forward two months and JOHNSON is on a plane headed to Austin, TX to audition for the 10th season of the show. This would be the first of three times that he would audition for the show. “Honestly, I’m glad they didn’t put me on the live shows the first two times,” JOHNSON admits. “I wasn’t ready. I had to figure out who I was, which is what I did before Season 13.”

They say third times the charm, and that is exactly what transpired when he traveled to Atlanta, GA to audition for a third and final time. He made it all the way to the live shows where he electrified audiences of millions with his explosive performances and magnetic personality. “It was an absolute honor and privilege getting to rock out on that stage,” he proclaims. “It was a dream come true!” The dream didn’t end there.

After being crowned the winner of Season 13 of “American Idol,” CALEB JOHNSON went to work recording his first album, TESTIFY, with a major label. It debuted at #1 on the iTunes Rock chart and #24 on the Billboard “Top Album Sales” chart. He was recruited as an opening act for some of the biggest touring bands in rock n roll: KISS, Cheap Trick, Sammy Hagar, Joan Jett & The Blackhearts, and Black Stone Cherry to name a few.

Even with all that, JOHNSON wasn’t content. TESTIFY had been rushed out right on the heels of his “Idol” victory, leaving him less than satisfied. He needed to write, record and perform music that better reflected what he could accomplish without restraint, so in 2016, he headed to Nashville where he began working on what would eventually become BORN FROM SOUTHERN GROUND.

BORN FROM SOUTHERN GROUND has been close to four years in the making. It was recorded at Zac Brown’s Southern Ground Studio, where he enlisted the help of his three-time Grammy®-winning multi-instrumentalist cousin, Bryan Sutton, to co-produce the album. According to JOHNSON, “Bryan brought my vision to life. Making this album was one of the purest, most enjoyable experiences I’ve ever had. Bryan let me be me.” Sutton brought in some of Nashville’s A-list musicians to form the studio band, including Audley Freed, Kenny Greenberg, Fred Eltringham, Mike Webb, Tony Lucido, Angela Primm, Gale Mayes, and Devonne Michelle. His childhood friend and long-time guitar player Josh Sawyer also sat in on the sessions, giving the album a home grown feel.

“This is the album I’ve always wanted to make and I’m super excited for people to hear it”, declares CALEB JOHNSON. “It’s real, raw and honest. Music is a religious experience and can be life changing. Moving forward I hope this album will inspire others the way I was inspired when I first heard the gospel through rock ‘n roll.”