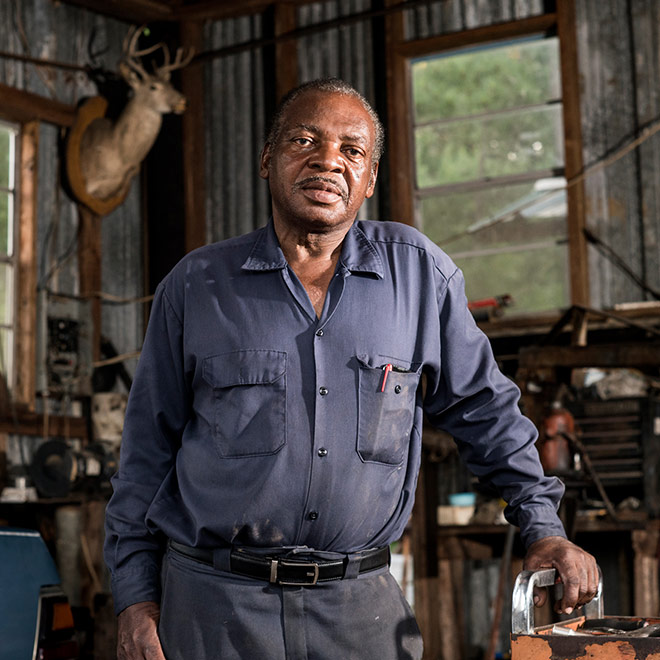 Willie Farmer is living proof that Mississippi continues to produce deep blues. The 62-year-old guitarist is neither a soul modernist nor revivalist, but simply a small-town auto mechanic who’s never shaken his love for old school legends like Muddy, Wolf and Lightnin’.

A lifelong resident of tiny Duck Hill, located in the hills east of the Delta, Farmer grew up on the family farm. He first took up the acoustic guitar in his early teens, and through picking cotton soon saved up enough money to buy an electric instrument.
He played for audiences at home and at school events and learned about blues and R&B mostly through listening to a powerful station out of Nashville.

“John R of WLAC, that’s how I listened to Lightnin’ Hopkins, Howlin’ Wolf. That’s how I got my first album by Lightnin’ [The Fire Records LP Mojo Hand]. I got the address off the radio and they sent it.”

“I learned Lightin’ pretty good, and then I went to B.B. I can play all the up-to-date stuff now—B.B., Little Milton—but I like the old stuff, that’s the real blues. The blues they’re singing today, that ain’t blues to me, it just doesn’t have the feel.”

Although Farmer is from a musical family, he didn’t learn much directly from his elders. His maternal grandfather had played the fiddle as a young man, but he rebuffed Willie’s offer to buy him a new instrument when he discovered the high cost.

Willie’s father Alex, a harmonica player who helped young Willie tune his guitar, had played as a young man with his brothers including Walter, who was recognized as one of the best guitarists to come out of the area.

In the early ‘50s Walter played together with Leo “Bud” Welch, who grew up in the region. Sadly, Walter was killed in Chicago in 1964—“a woman liked Walter, and a man got jealous and killed him” — and Willie never heard him play.